"Setting the Stage for School:  A Guide for Parents" 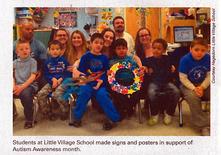 To read the full article, click on the picture next to the title

“HLVS Expands Preschool Classes for Kids on the Spectrum”

"A peek at their kids' progress"

“Who's Who In Not For Profit”

"Ask the Expert:  How Can I make My Child
With Autism Feel More Comfortable Riding the School Bus"